Bad Ems is traditionally known as “the therapeutic bath for catarrhs and asthma” and their resulting conditions. Above all, Bad Ems has gained its reputation because of its springs which belong to the alkaline-muriatic acidulous springs according to the medical practitioner Hufeland and which are the only thermal springs of this kind in Germany. The spring water contains hydrogen carbonate as well as chlorine ions, Na ions and 1 to 2 g of CO2, which is a total of 4 g of dissolved substances. The thermal acidulous springs are within a temperature range between 27° and 57°C. Moreover, there are also several cold acidulous springs which have temperatures below 20°C.

From the geological point of view, the area of the thermal springs of Ems belong to the Rhenish Early Devonian. We also call it Rhenish greywacke with alternating layers of quartzite, sandstone, sandy schist and clay schist. The outlets of the springs are situated terrace-like above each other, the eastern ones being at a lower level than the western ones. The regularity of the dip towards the southeast  is interrupted by the different anticlinal formations. The rather limited area of the thermal springs extends from a quartzite range at Malberg in the south underneath the river Lahn down to the plateau Kemmenauer Höhe which is divided into completely separate layers because of several parallel clay strata. The thermal water rises as an artesian well to the surface between the clay layers of different diameters at the location where the quarzite layers separate. The spring region of Bad Ems of today covers the square at the Kurhaus, the southern feet of the hills Klopp and Bäderlei, the adjacent riverbed and on the left side of the river Lahn the former Roman bath to the water tower. The most western spring which is also the highest one is behind the “Nassauer Hof”.  Between these both springs there are some cold acidulous springs.

There have been different theories about the origin of the water throughout the centuries. Today we assume that it has a volcanic origin. The impact of the hydrostatic pressure of the water of the river Lahn on the productivity of the springs has been known since ancient times. Likewise had the nearby mining industry in the western part of the city an impact on their productivity. A deterioration of the springs happened as early as in the end of the last century because of underground mining operations. The resulting dispute between the bath and the mining industry continued until 1945 before the energy supply in the mining industry collapsed as a result of war, so that the pits were flooded and the springs have gushed more intensively since then.

The tradition has a long history

In the year 1172 for the first time, then again in 1362, the „Thermae Emptzianae“ or the „warm bayt bey Eumetze“ had been mentioned in a document. At least we know that regular bathing activities had taken place as early as in the early Middle Ages; please note: bathing activities. The first known drinking recommendation of the spring “Kränchen” dates back to the 16th century.  Later the spring “Kesselbrunnen” was added in the 17th century, and even later different wells as rock springs under differing names, which were tapped. In the middle of the last century, the spring Römerquelle was discovered. In the beginning of this century all the springs were re-tapped. The last big spring to be tapped by drilling after the Second World War was the so-called Kampe-Sprudel which has turned out to be highly productive. 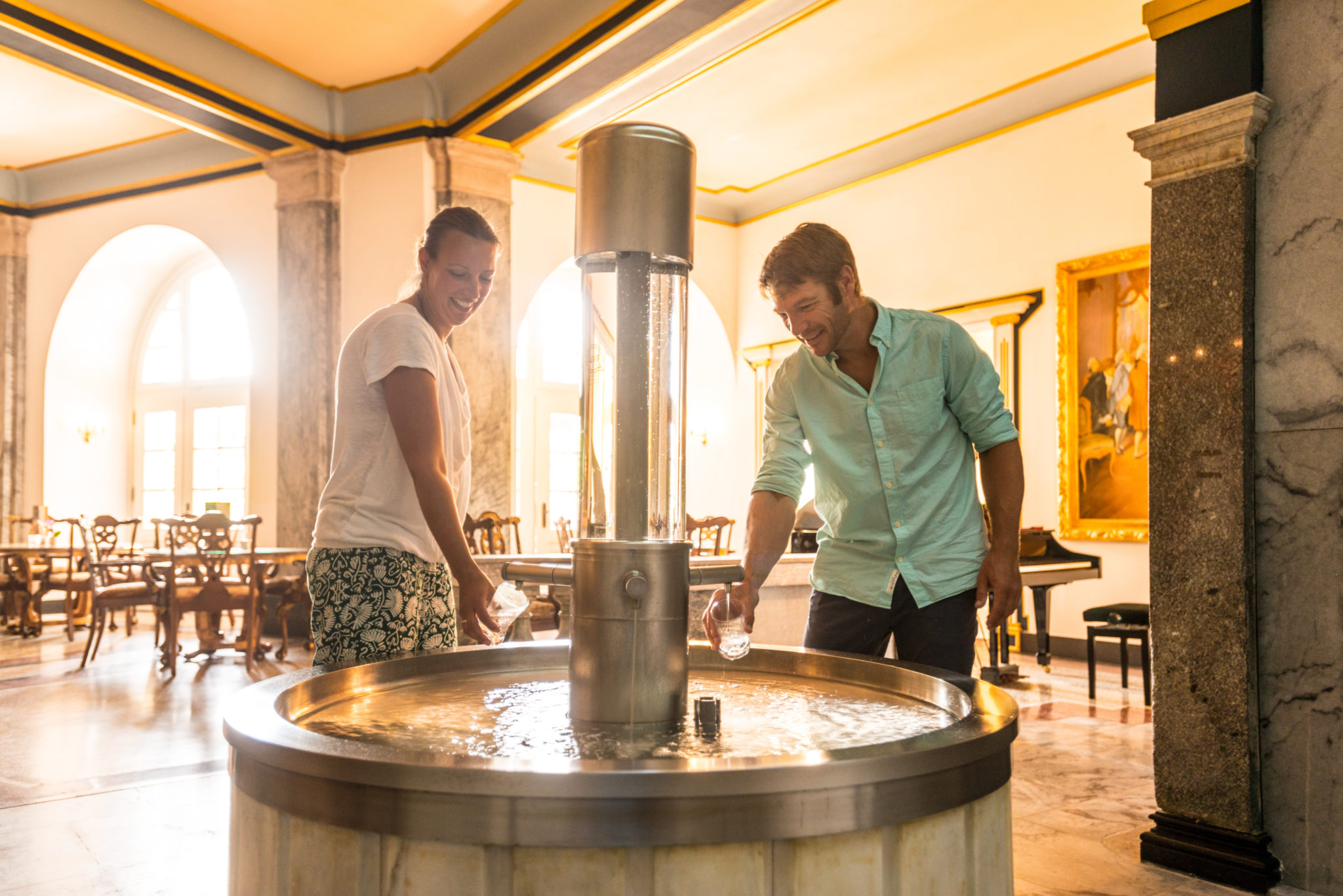 In the 17th and 18th centuries there was much competition between the Hessian and the Nassau bathhouses (named after their respective rulers) which gave an additional boost to the bathing activities. The related activities were promoted by renowned spa doctors of those days who definitely worked for the patients’ well-being and promoted the growing reputation of the bath.  One of the first persons whose scientific treatises, although long outdated today, have been preserved and are of medical-historical interest, was – in the beginning of the 16th century – the Marburg Professor Dr. med. Johannes Eichmann, called Dryander, whose name has been preserved in one of the local rehabilitation facilities. In the course of time, the reputation of the Emser Thermen spread far beyond the narrow boundaries of the Princely Houses of Duodez so that in the 18th century and increasingly in the 19th century, emperors, kings, dukes and celebrities from culture, politics and economy came here to seek healing and found it.

As early as in the middle of the last century, respiratory diseases and their related secondary disorders of the heart and circulatory system are a common theme in the great number of indications. This probably helped spread the reputation of the therapeutic bath far beyond the regional boundaries so that at the end of the last century, Bad Ems ranked second among the German therapeutic bathes regarding guest frequency .

The effect of the carbonic alkalies of the Emser Thermen is on the one hand to loosen the mucous membrane and on the other hand to liquefy the often viscous secretion to allow a significantly easier expectoration, under the precondition that there is no irreparable defect in the mucous membrane. Since the digestive tract is also lined with a mucous membrane, it also benefits from the stimulating effect on the secretion and peristalsis due to the released CO2. This effect is even enhanced when walking around while drinking. The well-known effect of the Emser Thermen which has continuously brought patients to our place up to our century has never lost its importance. It is no question that infective respiratory diseases are treated in a classical medical manner today, however supported by mineral water cures, inhalation, gargling and nasal irrigation with the water “Emser Wasser”. Moreover it seems even more important today to treat secondary disorders caused by these respiratory diseases in a gentle way. Since we live in a polluted environment, it is at least as important to enable a certain prevention and a further stabilisation of the mucous membrane to avoid falling ill at all.

Bad Ems offers the opportunity by natural means to regenerate your deteriorated organism in a gentle way and to do prevention at the same time which is more and more important – in the sense of a stabilisation and an increasing immunisation.

Implementation of the cure

For implementing the cure, experience has shown the positive effect of a treating system which can however be adapted from case to case. In the morning you start by drinking one to two glasses of the water Kränchenbrunnen, in case of gastrointestinal discomfort the water Kesselbrunnen is recommended. As already mentioned, the effect is enhanced by slowly walking around. Also before lunch and in the late afternoon you should drink one or two glasses. Before noon you can do gargling and nasal irrigations. The important inhalation therapy which is offered in the therapy centre as well as in the rehabilitation facilities of Bad Ems should be done twice a day. Depending on the medical findings we distinguish between a humid inhalation in a room or an inhalation with an inhalation device, the latter usually in a slightly coarser droplet form for loosening mucus. Aerosolization is a special method operating with a fine dispersion which reaches the smallest bronchioles and alveoli where it unveils its effect. This is of particular importance for bronchial asthma sufferers who bronchial-dilating medicinal products can be given to in this way with Emser water being the vehicle.

The late sequelae of the asthma emphysema complex in the form of cardio-vascular insufficiency are tried to prevent by CO2 bathes which are available in the thermal bathes. The effect of the carbonic acid bath at a temperature of 30 to 32° C is the constant thermal contrast stimulus – the peripheral circulatory condition is improved (dilatation of the capillaries). The heart muscle is relieved by the physical pressure of the water. Regardless of this specific carbonic acid effect, which strictly should be experienced not more than every second day, the thermal water of  “Emser Therme” which has a temperature of 32°C and is almost free from CO2, is the ideal completion to relieve tension in your locomotor system and for patients suffering from rheumatic disorders.

The thermal springs at Bad Ems gained special importance when people succeeded in offering the product as salt “Emser Salz” and later as lozenges “Emser Pastillen”. In earlier times, the water had been sent in jugs across all borders (the first shipment of water had taken place as early as in the middle of the 18th century). The Emser spring salt has been commercially available since 1902.

Proven bathing activities in Bad Ems date back to the late Middle Ages, since the 14th century, which makes it rank among the most ancient therapeutic bathes north of the Alps.

Operation of the therapy centre until 2010

We will be pleased to care about any issues you might have. Please do not hesitate to contact us